The concept of EU labor mobility is often portrayed as a viable solution to the changing demands of the labor market. However, the practical application of this development by the EU member states is far from frictionless from a legal and tax standpoint. In reality, labor law and tax compliance across multiple EU jurisdictions are still insufficient. Poland, among other Eastern European countries, remains the leading supplier of trades workers to the Netherlands. Notwithstanding its popularity, the secondment of workers from Eastern Europe is associated with many legal and tax challenges. 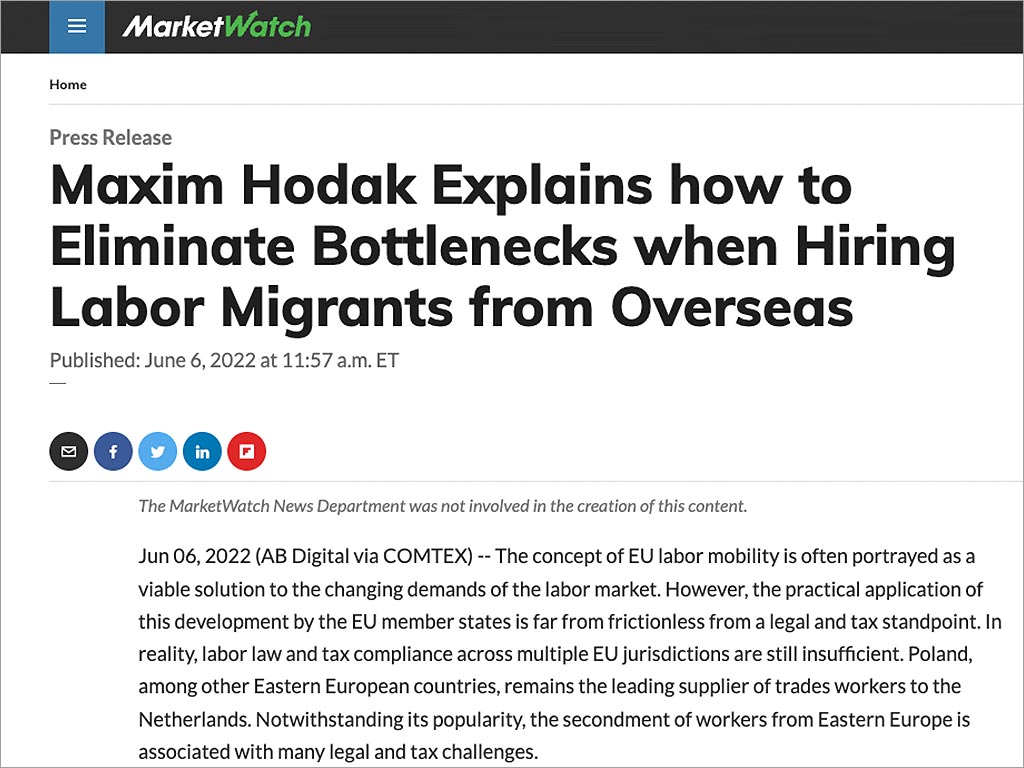 What are the bottlenecks in the employment of labor migrants from Eastern European countries?

Navigating the EU and Dutch laws that regulate the employment of labor migrants presents many challenges for executives and business owners. Almost no one does it right the first time. Thus, compliance check-ups reveal that the absolute majority of small- and medium-sized companies make critical mistakes when employing foreign workers. The most common secondment errors include issuing the accompanying documents and drawing clear contacts between multiple counter-agents that are compliant with all the jurisdictions. Unaddressed, these mistakes can lead to fines imposing the risk of bankruptcy for many employers.

Maxim Hodak is an attorney who specializes in corporate and contract law. Due to his multilingualism and multicultural background, he became a magnet for international companies operating across borders within the EU and beyond. Throughout 20+ years of practicing law across multiple jurisdictions, Maxim witnessed how the lack of compliance between jurisdictions resulted in bottlenecks affecting companies’ inability to scale. In some cases, such bottlenecks even led to companies’ discontinuity.

Resulted by personnel shortage in the Netherlands and the lack of a clear-cut way to second it, many construction firms (among other sectors) are faced with an additional challenge – establishing legal, tax, and labor compliance across multiple jurisdictions. Solving this issue requires immense financial and intellectual resources that many businesses do not avail. Outsourcing to external Central European HR-services providers creates another set of bottlenecks – the lack of transparency, communication issues, and difficulty to find professional and honest partners.

Mistakes throughout the secondment process with multiple parties involved become unavoidable and often costly. On top of that, chain liability warrants that all counter agents bear financial consequences for any errors detected throughout the secondment process. That puts entrepreneurs in industries that are already sensitive to regulators’ decisions, and economical changes and are dependable on manufacturers and overseas labor in dire straits.

Monetary consequences that a construction company, for instance, bears in case errors are revealed during the secondment process range from € 4000 to € 16000 per employee. For the majority of small- and medium-sized businesses in construction and dozens of other industries bearing such penalties is jeopardizing. Despite so many risks, Maxim Hodak admits that establishing a steady and fully-compliant workflow for hiring seconded labor migrants from overseas has become a key success factor for his numerous clients. In many cases, this enabled companies to reach new avenues in business and development.

One such example is a real estate developer whom Maxim and his team assisted in eliminating another bottleneck – unreliability of service and quality working with independent contractors in The Netherlands. The client couldn’t guarantee quality control relying on the workforce managed externally by contractors. Finally, the company leadership made a difficult decision to relocate an in-house team consisting of dozens of construction workers from Ukraine to the Netherlands.

“No precedent of construction personnel employment in a legally responsible manner that answers numerous laws and regulations both in The Netherlands and in this case Poland could be identified at that time. So, my team and I had to pioneer. We saw a huge gap in the market for such services. Nobody in the Netherlands was doing it in the small- and medium-sized sector. Months of blood, sweat, and tears and we trailblazed the path across multiple jurisdictions. We could finally ensure all counter agents were fully compliant with the EU directives, as well as Dutch and Polish laws.” – shares Maxim Hodak.

A solution to the personnel shortage

Maxim anticipates that the demand for seconded technical labor from overseas will only increase. Solving this will require creativity and multidisciplinary knowledge of experts in various aspects of corporate, tax, social security, contract, and labor law across multiple countries. Openness and transparency between partners in the process are essential for the success of such collaboration.

Most importantly, employers must be proactive. To prevent errors, penalties, and risks Maxim Hodak and his team recommend you start with finding a qualified consultant to carry out the checkups and the controls. Law & More helps established businesses improve existing processes associated with employment from overseas, payroll, and tax. With the help of Maxim and his expert team, penalized businesses corrected their course and avoided bankruptcy. Entrepreneurs who are just starting will receive advice on a suitable corporate structure.

If you are an entrepreneur looking to scale, consider Maxim Hodak’s in-house training tailored to your business needs. You will learn everything you need to know to hire Eastern European personnel the right way, how to establish secondment from overseas, what corporate structure to implement, and more. Maxim will also walk you through the legal and tax compliance in the Netherlands and the EU. Maxim’s expertise is instrumental in helping you avoid costly mistakes, mitigate risks, eliminate operational bottlenecks and enlarge your team. Law & More will ensure that your business has a strong foundation on which it can thrive.

Maxim Hodak is a Netherlands-based Attorney-at-Law. Maxim has extensive expertise in legal matters of hiring seconded employers. Fluent in Dutch, German, French, English, Russian, and Ukrainian, Maxim is a magnet for multinational businesses. His career comprises 20+ years as an attorney pioneering in establishing compliance across multiple EU jurisdictions. Due to Maxim and his team’s efforts, entrepreneurs and small- and medium-sized business owners can hire employees from overseas in a frictionless way meeting all the standards of the Dutch law and the laws of other EU countries.

Maxim Hodak holds a Master’s degree in Law (University of Amsterdam) and Management of Business Administration (MBA) (TIASNimbas in Tilburg) as well as a Postgraduate degree in the area of Investment Finance (EHSAL Management School, Brussels). He is constantly preoccupied with continued Dutch legal and business education. Maxim Hodak is available for an interview upon request.

Law & More is a dynamic multidisciplinary Dutch law firm and tax advisory specializing in Dutch corporate, commercial, and tax law based in Eindhoven and Amsterdam. The firm combines its corporate and tax background and the know-how of a big firm with the attention to detail and customized service you would expect from a boutique firm. Law & More renders its services to a range of Dutch and international clients, from corporations and institutions to individuals with sophisticated requirements. Comprised of a dedicated team of multilingual lawyers and tax advisors with in-depth knowledge in various aspects of the Dutch and law, the firm also excels at tax-efficient structuring of assets and activities. Law & More is also a member of the LCS network of lawyers based in Amsterdam, The Hague, Brussels, and Valencia.

General terms and conditions: what you need to know

General terms and conditions: what you need to know When you buy something in a web shop – even before you have […]